It’s the first day of the ultimate blog tour for the first in The Great Devil War series written by Kenneth B. Andersen. The first instalment is called The Devil’s Apprentice, an absolutely fun fantasy mystery that could be read from, in my opinion, middle grade reading level and up.

Kenneth B. Andersen was born in Denmark and begun writing when he was a teenager. 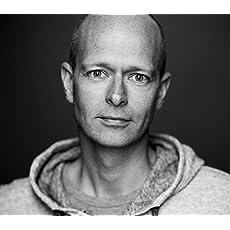 In 2000 he published his debut fantasy book, The Battle of Caïssa, and that’s when things really took off. Since then Kenneth published more than thirty-five books for children and young adults in genres ranging from fantasy to horror and science fiction. His books have been translated into more than 15 languages and with his series about the superhero Antboy has been adapted for film, which is available on Netflix. An animated tv series is currently in development. A musical of The Devil’s Apprentice opened in the fall 2018 and the movie rights for the series have also been optioned.

Kenneth lives in Copenhagen with his wife, two boys, a dog named Milo and spiders in the basement.

Philip is a good boy, a really good boy, who accidentally gets sent to Hell to become the Devil’s heir. The Devil, Lucifer, is dying and desperately in need of a successor, but there’s been a mistake and Philip is the wrong boy.

Lucifer has no other choice than to begin the difficult task of training Philip in the ways of evil. Philip is terrible at being bad, but when he falls in love with the she-devil Satina and experiences the powerful forces of love and jealousy, the task becomes much easier.

Philip finds both friends and enemies in this odd, gloomy underworld–but who can he trust, when he discovers an evil-minded plot against the dark throne?

The Devil’s Apprentice was published by Høst & Søn on the 15th of October 2018 and until recently, well until The Write Reads decided to do an ultimate blog tour, was off my radar but aren’t I glad that my attention was drawn to it. I was lucky enough to have won signed copies of this book and the second in the series The Die of Death, so i’d like to say thanks to Kenneth and Dave for that opportunity.

So, it’s always the books that fly under your radar that can become some of your favourite reads, ones that you may have been 50/50 about but after gorging on the first few chapters you are completely captivated. This was me, I also rambled to Dave about how absolutely excellent Kenneth’s writing is, his ability to create a hellish world with a number of characters that you just can’t help but love. I plan on consuming all instalments of this series in 2020, i’m a firm fan.

Fasten your seatbelts because I’m about to take you on a blogging journey to tell you why I enjoyed my time in Hell with our young male protagonist Philip. Immediately, as soon as I begun reading I got The Chilling Tales of Sabrina vibes, mixed with Constantine but only the foundation feeling, built upon it was a fun weaved tale that included biblical references (not the hard-core stuff) such as David & Goliath, the origin of Lucifer and the link between good, evil and free will. I absolutely adored The Devil’s Apprentice and at times it made me think are we all 100% good / evil, even if we are not, does it matter? There’s always time to change. No-one is perfect right? The way that Kenneth unravels the plotline was perfect, with each chapter easily flowing into one another. This, along with the quality character development held my attention the whole way, especially Lucifer’s feline PA Lucifax – the talking cat. There was a great amount of humour and mystery mixed into the narrative has created a read that this 29 year old reader loved AND one that my nine year old would also love, mother – daughter buddy read?!

This was a witty read, filled with unexpected friendships, created enemies and a mystery thrown in which had you pulling out the corkboard, pins and red thread to help solve what was going on. Will Philip uncover the truth before it’s too late? I inhaled The Devil’s Apprentice in 24 hours and bloody Hell it was a cracker.

Thanks again to The Write Reads for having me on the tour, I absolutely loved this book. Have you read it? Are you planning to? Let me know your thoughts. Make sure you follow the tour using #UltimateBlogTour