That’s right, i’m back with a whole new blog tour review for you today! I’ve been missing from the tour scene for a while, but it’s been refreshing to fall into such a gripping thriller, and feeling the review juices flow. Today, is my day on the ‘The Ex Girlfriend’ by Nicola Moriarty tour, arranged by Sriya Varadharajan, who kindly sent me a copy of this novel in prep of the tour.

Nicola Moriarty is a Sydney-based novelist, copywriter and mum to two small (but 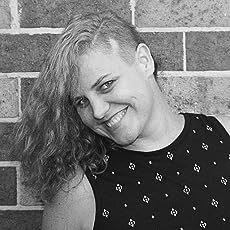 remarkably strong willed) daughters. In between various career changes, becoming a mum and completing her BA, she began to write. Now, she can’t seem to stop. Her published works include the novels Free-Falling, Paper Chains and The Fifth Letter plus the novella Captivation as well as contributions to two UK anthologies. She is also the younger sister of best-selling and award-winning authors, Liane Moriarty and Jaclyn Moriarty.

SHE WANTS HIM BACK. SHE WANTS YOU GONE.
Finally, Georgia has found the one. Luke is kind, handsome, and makes her feel safe – which is what she needs after everything she’s been through.
The only problem is his ex-girlfriend.
Luke says Cadence just can’t accept the breakup, and that explains the texts, the emails, the notes…
But then things start to go very wrong – will Cadence really do whatever it takes to get what she wants?

So, let’s cut to the review chase. I haven’t read a Nicola Moriarty novel before, I know, I should be drawn and quartered! Now I’ve seen that hard to resist light and i’m now a member of the fan club – with a spectacular back book catalogue. Score! I was immediately drawn in to The Ex Girlfriend, mainly due to how much I just loved Georgia, the female protagonist of this novel. She’s a nurse, a lovely and caring one, who is excited about an upcoming date. We’ve all been there. You can’t help but just be rooting for her – in walks Luke. The handsome,  charming knight in shiny armour. He makes our Georgia light up like a firework BUT there’s one issue, he comes with some baggage in the shape of his bitchy, jealous and possessive ex girlfriend Candence…. Now that lass is the essence of bitchy, you’ll gasp at the lengths she’ll go to, to get Luke back. The fear echoed through Georgia’s narrative will have you hooked, adrenaline pumping while walking the taut rope of literary danger.

The storyline overall was suspensey moreish, where you find yourself wanting to go to bed but your inner book demon is telling you ‘one more chapter’ and who am I to say no? I found myself stretching up further and further as the plot begun to unravel, as Georgia’s life started to crumble – distant friends, issues at work etc. You just can’t help but feel sad for Georgia, at times you just want to slap naïve her and tell her to take the Candence situation by the reigns. I loved how the narrative was written in the first person, mainly from Georgia’s point of view so we get to read her feelings, thoughts and also fears – with some added POVs which really work while flowing easily into each chapter. The chapters are easily to guzzle down, capturing and thrillingly suspenseful – sinister.

Although I found The Ex Girlfriend to be an easy read to consume, I found it difficult to put down and walk away from. This book ticks all the boxes for a perfect autumn – winter, snuggled under a heavy winter blanket read. OR a sitting by the side of a pool with sunnies and some glorious rays of sunshine read. However you read it, just make sure you do.

So that is my book recommendation of the day, if you’ve already read it let me know what you think in the comments. Thanks again to Sriya and Michael J Books for having me on the tour! Make sure to check out the previous tour reviews using the hashtag #TheExGirlfriend!