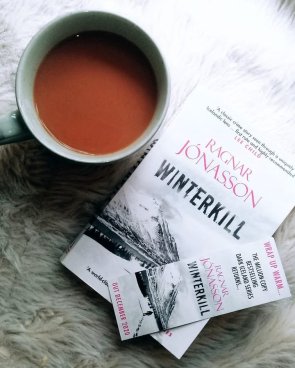 When the body of a nineteen-year-old girl is found on the main street of Siglufjörður, Police Inspector Ari Thór battles a violent Icelandic storm in an increasingly dangerous hunt for her killer … The chilling, claustrophobic finale to the international bestselling Dark Iceland series.

Easter weekend is approaching, and snow is gently falling in Siglufjörður, the northernmost town in Iceland, as crowds of tourists arrive to visit the majestic ski slopes.

Ari Thór Arason is now a police inspector, but he’s separated from his girlfriend, who lives in Sweden with their three-year-old son. A family reunion is planned for the holiday, but a violent blizzard is threatening and there is an unsettling chill in the air.

Three days before Easter, a nineteen-year-old local girl falls to her death from the balcony of a house on the main street. A perplexing entry in her diary suggests that this may not be an accident, and when an old man in a local nursing home writes ‘She was murdered’ again and again on the wall of his room, there is every suggestion that something more sinister lies at the heart of her death…

As the extreme weather closes in, cutting the power and access to Siglufjörður, Ari Thór must piece together the puzzle to reveal a horrible truth … one that will leave no one unscathed.

Hello, hello, hello! I hope that you’re all having a chill-tastic day and you are ready for my #Orentober book recommendation of the day! Today’s object of bookish affection is the hugely awaited sixth book in the Ari Thór series, Winterkill written by Ragnar Jonasson, translated from French by David Warriner. I was so blown away when I recieved this proof slice of dark Icelandic Noir from Orenda Books, so much so I jumped in straight away!

Published last December in hardback, paperback and ebook, people went CRAZY for it!

Many of you may already know that I love thrillers, mysteries, crime fiction – three genres which Winterkill fit into perfectly, firstly the atmosphere is blanketed with snow from the offset, you’re aware that something deathly sinister is about to occur but the contrast of blood pooled against an pure background is twistingly seductive isn’t it? A cruel act of stealing away someone’s life with a backdrop of life’s most beautiful phenomenal which in its own way kills. How absolutely stunning! So we are transported to Siglufjörður, Iceland, to experience the chilling sequence of events that led Ari Thór back to our bookshelves.

When a nineteen year old girl falls to her death, found by our protagonist, although a breath-holding moment, Ragnar created such a captivating scene where again, Ari Thór’s humanity and sensitivity of the individuals death and it’s at this point that I fell in love with Ragnar’s writing all over again. The tale that you’ll find amongst these pages, is a dark slice of Icelandic noir, from Ari’s point of view. In this book you gather a further emotional understanding of our protagonist after his relationship breakdown – as he juggles both his personal, parenting and professional life. The storyline develops with a glued to the seat tension as you, the reader with hold on tight for the delicious breadcrumbs fed to us, during the police investigation. The suspense filled chapters quickly evolved into a fatal mystery where you suspect EVERYONE! It left me wide – eyed and greedily wanting more, would it be terribly to petition for one more book? Can Ragnar be convinced?

Winterkill would be criminal to miss, translated in such a way by David that he captures the intensity of the events and the icy chill in the air, you will most definitely need a cosy blanket and a hot chocolate while reading. Available just in time for Christmas Eve, why not follow the Icelandic tradition of a book and chocolate to celebrate it – Winterkill being that book! You haven’t read the other instalments of the Ari Thór series, it’s okay, I feel that you are able to read Winterkill without having read the previous book (although it’s always great if you have because you can see how the protagonist develops throughout the series).