Before Christmas, Katya from Riverrun got in touch after I expressed interest in reviewing Our Fathers by Rebecca Wait. When I started beginning to think they’d forgotten about me, a glorious hardback copy of this novel came through my letterbox and I couldn’t have been happier. So, my thanks go to both Katya and Riverrun for the copy of Our Father and not forgetting about me.

That’s right people, today, the 23rd of January is the official publication day of Our Fathers, which means that you can now treat yourself to a hardback or kindle copy of this great read. I couldn’t be more excited to finally share my thoughts. If I coax you into grabbing yourself a copy, I’ve included the links to sites where it can be purchased, at the end of the post.

What kind of man kills his own family? 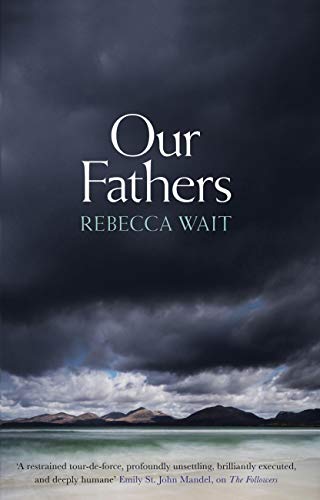 When Tom was eight years old, his father took a shotgun and shot his family: his wife, his son and baby daughter, before turning the gun on himself. Only Tom survived.
He left his tiny, shocked community on the island of Litta and the strained silence of his Uncle Malcolm’s house while still a young boy. For twenty years he’s tried to escape his past. Until now.
Without knowing how to ask, he needs answers – from his uncle, who should have known. From his neighbours, who think his father a decent man who ‘just snapped’. From the memories that haunt the wild landscape of the Hebrides.
And from the silent ones who know more about what happened – and why – than they have ever dared admit.
By turns gripping, beautiful, devastating and tender, Our Fathers is a story about violence and redemption, control and love. With understated compassion and humour, Rebecca Wait gives a voice to the silenced and to the silences between men of few words.

I didn’t want to finish Our Fathers, I tried to ration myself a chapter at a time. I wanted to savour every page like it would be the last page that I ever read but it didn’t work out that way. I picked up Our Fathers and was immediately drawn into an emotionally prosed novel by the heart strings. One that resolves around a tragic question, what kind of man kills his own family?

Tom returns to a small, close knitted community on the island of Litta, where he used to call home before he became the outsider after his dad murdered his family. He is reunited with his estranged uncle, Malcolm, who he shares not only a despairing grief with, but also guilt that they were unable to prevent his father’s violent actions. Although, Tom’s guilt runs deeper in the territory of survivor’s guilt. Why didn’t he save his brother? Wouldn’t it have been better to die together, than for one of them to survive. Our Fathers explore personal backlash after an event of such a violent crime, as well as digging deeper into the causations of such behaviours. You’ll struggle not to open your heart to Tom’s with flash backs to his past experiences and how it’s affected him in adulthood. A tender fictionalisation that focuses on raw, non-fictional aspects.

The characterisations of the islanders add to the sympathy you feel for Tom as an individual because many may feel that he’s his father’s son, which is a fear not only they posses. I feel that the title Our Fathers was derived from The Lord’s Prayer, where this line can be found:

“…..And forgive us our trespasses, as we forgive those who trespass against us.”

Why do I think this quote has a place here? Because I think that is exactly what Tom is looking for. He’s looking for forgiveness for not preventing the incident and leaving the island, he is hoping to forgive himself for the same things and I also think a part of him want the closure of why his dad committed these murders and forgive him too. All the negativity of past events and emotions have clearly gnawed away at Tom, he’s being held back from living his life freely by the emotional baggage he has yet to resolve within himself. By forgiving in all these aspects, he can finally emerge from the darkness into the light, letting go of the fear that he will become his father.

Through the altering narrations found throughout the novel, you can begin to piece together what contributed and ultimately lead to a man to kill his family. The reader is spiralled down a rabbit hole of events from both Tom and Malcolm’s points of view. Different stories that share a similar factor of sadness. Rebecca has used many aspects of real life to create a movingly poignant novel that is filled with tenderness and compassion, with heartbreak speckled throughout. A novel that revolves around family violence that show how it affects the survivors. I immediately became intoxicated by the writing, captivated by the characterisation and plotline, I never wanted to surface from the waves of Tom’s sadly chaotic life. I absolutely adored every single page!

Our Fathers is a must read if you love literary fiction, I would highly recommend it! If I’ve peaked your interest, you can order from any of the three sites below.

Thanks for popping on to read my thoughts,
Until next time,
Happy reading!