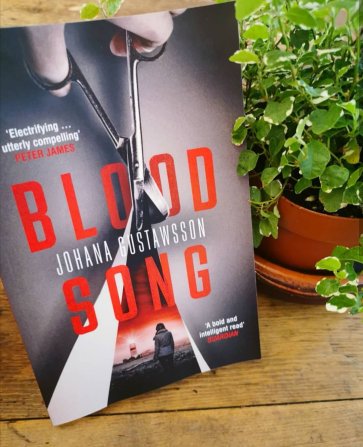 Spain, 1938: The country is wracked by civil war, and as Valencia falls to Franco’s brutal dictatorship, Republican Therese witnesses the murders of her family. Captured and sent to the notorious Las Ventas women’s prison, Therese gives birth to a daughter who is forcibly taken from her. Falkenberg, Sweden, 2016: A wealthy family is found savagely murdered in their luxurious home. Discovering that her parents have been slaughtered, Aliénor Lindbergh, a new recruit to the UK’s Scotland Yard, rushes back to Sweden and finds her hometown rocked by the massacre. Profiler Emily Roy joins forces with Aliénor and soon finds herself on the trail of a monstrous and prolific killer. Little does she realize that this killer is about to change the life of her colleague, true-crime writer Alexis Castells. Joining forces once again, Roy and Castells’ investigation takes them from the Swedish fertility clinics of the present day back to the terror of Franco’s rule, and the horrifying events that took place in Spanish orphanages under its rule.

Johana Gustawsson has worked as a journalist for the French and Spanish press and television. Her critically acclaimed Roy & Castells series, has won the Plume d’Argent, Balai de la découverte, Balai d’Or and Prix Marseillais du Polar awards, and is now published in 19 countries. A TV adaptation is currently underway in a French, Swedish and UK co-production. David Warriner translates from French and nurtures a healthy passion for Franco, Nordic and British crime fiction. David has lived in France and Quebec, and now calls beautiful British Columbia home.

I absolutely love a translated crime thriller, and Blood Song didn’t only hit the spot in that genre but it was written with understanding to the history behind it, as well as superbly translated from French by David Warriner. From the author’s note to the acknowledgements I was entrapped by the words and the storyline of Blood Song, it is an utterly magnificent book that’s created from the unbelievably sinister foundation that is Francoist Repression of Spain – also known as White Terror.

Blood Song will not only captivate you within a story that crosses timeliness (that are labelled brilliantly, for me that helped me avoid all the timing / location confusion), but also one that crosses country borders: from Spain to London to Sweden. Fasten your seatbelts, you’re in for a reading ride!

The author’s note that was included before delving into the storyline created the overall setting by providing some historical insights into Franco’s violent ruling and how he kept his grasp on the power using fear and religious outlets. Johana Gustawsson has sewn the lives of the innocent amongst the pages of Blood Song so their story is told, remembered and how after generations the people are still suffering this dark era of Spanish history.

Blood Song is a revisit to the life of profiler Emily Roy, who I absolutely love – she’s super intelligent, strong and takes no crap – I love an independent female character and Emily has become one of my favourites. As she joins forces with Aliénor and true crime author Alex is Castells, they are sucked into a dark rabbit hole of satanic murders that root back further than they could have ever imagined. A majority of the novel is seen through the eyes of Emily which is both insightful and exciting, especially as she begins to pick apart sequence of events – I enjoyed the in-depth police procedural aspects of the narrative also, it gave a further level of authenticity, who doesn’t love the gritty details!

You can feel the emotions that have been injected into the storyline, most of all the internal rage that has been suffered, as well as the pain and loss of innocence experienced by not only the children of the Orphanages but the pregnant Republican women, who fear for their unborn children after their expected execution. As we time travel back to 1952, the narrative is through the unknown eyes of a young girl, as the horrifying details of orphanage life is revealed, the ties of sisterhood bound for life.

Blood Song is a historical fiction crime read that has very non-fictional routes. Not only is it a a heart palpitation of a read, but it’s 272 pages of humanity, where pain, corruption, grief and freedom meet in an explosive plotline, with closely authentic characters. Johana has created a shockingly vivid fictional prose with such an emotive core, that you’re going to find difficult to put down and forget about. Sobering and haunting all at the same time! The writing is unfaltering, a perfectly planned layout of events that create an increasing tautness with every chapter that will leave you teetering over the edge with a tension filled expectation. It will not dissapoint!

Overall, I enjoyed every single page of this historical – crime thriller hybrid. Blood Song is the third installment the Roy & Castell series, best read in order BUT I think that this one could be read without the prior read. It depends on your reader’s rebellion level. However you decide to read it, you’ll love it. I certainly did. Also, please remember to read the accompanying acknowledgement, Johana shares with us her personal journey while writing Blood Song, it’s always interesting to have a peak author insight.