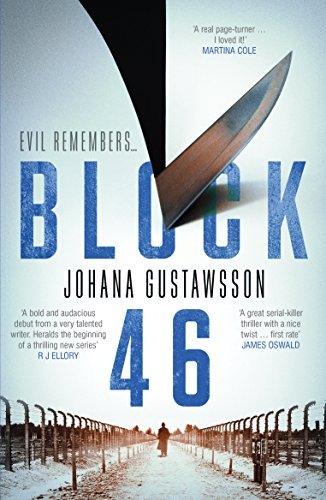 Falkenberg, Sweden. The mutilated body of talented young jewellery designer, Linnea Blix, is found in a snow-swept marina.
Hampstead Heath, London. The body of a young boy is discovered with similar wounds to Linnea’s.
Buchenwald Concentration Camp, 1944. In the midst of the hell of the Holocaust, Erich Hebner will do anything to see himself as a human again.
Are the two murders the work of a serial killer, and how are they connected to shocking events at Buchenwald?
Emily Roy, a profiler on loan to Scotland Yard from the Canadian Royal Mounted Police, joins up with Linnea’s friend, French true-crime writer Alexis Castells, to investigate the puzzling case. They travel between Sweden and London, and then deep into the past, as a startling and terrifying connection comes to light.

Hello there, welcome to my first Johana-esque Orentober review. Yes, you read that right, the first! As many of you may know, I am always the last to read any book – partly because i’m so behind and partly because so many of my book pals usually love it and i’m so afraid that I won’t. In the case of Block 46, the first in the Castells and Roy series, it’s been a year since I’ve been told that I must read it! Well, I read it and I loved it – maybe ‘loved’ is the wrong word considering the dark nature that lurks between these pages, but I would definitely expect to see its presence on my Reads of 2020 list this year! Block 46 was originally published by Orenda Books in 2017, a great slice of French Noir translated to English by Maxim Jakubowski. You can grab a copy, in a variety of formats here.

Block 46 has become one of the most difficult books that I’ve ever reviewed because I enjoyed every single page but the contents of these pages are infuriating, grim and heart ripping emotional, yet I hung on to every word because Johana has the ability to intoxicate her readers through her use of emotive language, characters and the way she develops a captivating storyline. As soon as I finished the last page of Block 46 I fangirled over a perfectly timed video call to my wonderful Meggy, I vomited a trail of words out to her but this also included my awe at how Johana has written this intricate, brilliantly written novel that spans not only over countries; London and Sweden, but also over the lines of time, yet being able to tie all the threads together cleverly that connect both the past and present. Block 46 is one of the most ingenious crime fiction – French noir books that I have ever read.

Okay, so lets talk characters! This first in series sees the introduction of our dynamic duo both quite different but pulled together when Alexis, French true crime writer, becomes involved within a case that mirrors that being investigated by Emily Roy, in concern to the body of a young boy murdered in London. For me, I felt that the two characters were two sides of a coin, where Emily was upfront with theories, straight to the point one could say, I found Alexis to be somewhat a watcher and researcher especially as she delved into the ties to the past. I enjoyed both of the characters strength as protagonists and intelligence – as someone who loves a gruesomely forensic read, Johana absolutely hit all my fictional bloodlust boxes, as well as touching upon the psychology behind murderer profiling. Not only does this type of attention to detail draw me in further, but it also demonstrates the level of research that Johana has gone to in order to make the storyline as authentic as possible in terms of the crime fiction side of things. The historical element of Block 46 is a whole different board game – rooted from 1944, from the pits of a human hell and within the walls of Buchenwald Concentration Camp we meet our historical protagonist Erich Hebner who is clawing to survive the Nazi detail. Thi8s gut-wrenching look at history creates a close to home narrative which will both shock and disgust you, while also keeping you hanging on the edge of your seat questioning how this evil example of humanity could be entwined into the case investigated by Roy and Castells. Block 46 is not a book for the faint hearted, it’s a startling reflection of human behaviour and psychology, while also creating the perfect dark crime fiction atmosphere, filled with suspense and tension. Honestly, I can’t fault it – with its inclusion of injected chapters from an unknown individual, your attention will be drawn in and curiosity peaked.

I read Blood Song first, the third instalment of this series, and I knew then that Johana takes this extremely personal element of her history and builds upon that as a foundation of her storylines. The attention to details are also touched upon with an air of sensitivity, while also not sheltering the reader from the true horrors of the events that occur throughout the novel. The modern side of the storyline is filled with equal gasp worthy shocks and horrific detail, with language being used to create a chilling setting, in a time where evil will always remember – I had to put the book down and step away but then equally wanted to devour the whole book in one sitting. Block 46 is a pitch black historical twist on crime fiction that should absolutely be on your TBR, I can’t stress that if you buy one book today, please let it be this one.

Okay, I am absolutely out of coherent ways to describe this literary masterpiece, like I have incoherent words and some swearsies but I shan’t share them here, my kindle notes were terrible! Have you read Block 46? What did you think? Please share your thought using the hashtag #Orentober!