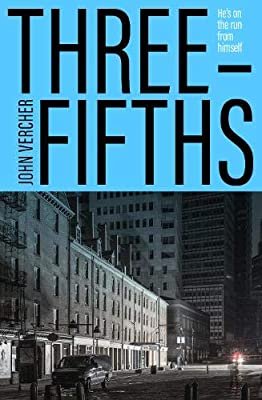 Pittsburgh, 1995. Twenty-two year old Bobby Saraceno is a biracial black man, passing for white. Bobby has hidden his identity from everyone, even his best friend and fellow comic-book geek, Aaron, who has just returned from prison a newly radicalized white supremacist.

During the night of their reunion, Bobby witnesses Aaron mercilessly assault a young black man with a brick. In the wake of this horrifying act of violence, Bobby must conceal his unwitting involvement in the crime from the police, as well as battle with his own personal demons. A harrowing story about racism and brutality that is more urgent now than ever.

I was so thrilled to have won a copy of John Vercher’s debut novel Three-Fifths from Pushkin Press back in May, thanks to Poppy for sending me out a copy and for the opportunity to read what has become one of my favourite books this year! Also, happy publication day eve to John, you can pre-order his book today here!

Three – Fifths has already been added to the five star group aka the best reads of this year list – an utterly sobering, shockingly captivating and brutally relevant read that will drum home the reality of aspects found in society, as well as a telling with personal nods back to John’s own college story. Within the pages of this novel, you will find stereotypical beliefs, racism and prison radicalisation, as well as one man’s struggle to embrace his identity publicly due to the fear that he will be seen, treated and stereotyped differently. Three – Fifths is a novel written during a backdrop of the OJ Simpson trial, when a rich African American was on trial for the violent murder of his Caucasian wife Nicole Brown. Across America this case has split communities into believers of OJ’s innocence and believers of his guilt – coupled with the LA riots, it set for an increased tension between multi-ethnic communities that lead to demographic shifts, possibly increased radicalism.

So the stage of this story is set, we are taken to Pittsburg where three-fifths is told through various view points, a mother, a doctor and of course our main protagonist Bobby, who is biracial. Bobby’s best friend, Aaron emerges from prison radicalized by the Brotherhood. The atmosphere between these two characters is taut, especially as Bobby begins to learn that his best friend isn’t the comic-book geek who was originally sent to prison. As events take a drastic turn, both parties are binded together by a secret, with only one showing guilt and remorse, you know that it’s going to come to a bubbling release. I was completely intoxicated by the atmosphere, setting, the period of time that Three – Fifths takes place, the way that the multiple view points become intagled within the same story is mesmerising, with the taste of danger just on the horizon. The diversity of the characters voices, their personal experiences in the world of racism whether felt in personal, familial or professional settings, they will shock you and create further depth of characterization, with further layers of the story.

John has created a hard-hitting debut that looks at both sides of racial radicalism, including the motives and brainwashing of the radical themselves. Three – Fifths is a book that should be read, there’s a quote about whenever you read a good book, somewhere in the world a door opens to allow in more light. I think Three-Fifths is a deeply personal and raw book that will soberly highlight issues, one that I think could be a book that helps people to understand perspectives and experiences – a book that could help open the door and allow in more light. A must read! An absolute read! Order it now!