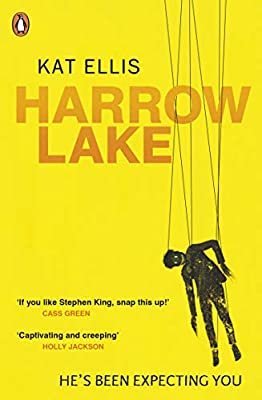 Lola Nox is the daughter of a celebrated horror filmmaker – she thinks nothing can scare her. But when her father is brutally attacked in their New York apartment, she’s swiftly packed off to live with a grandmother she’s never met in Harrow Lake, the eerie town where her father’s most iconic horror movie was shot.

The locals are weirdly obsessed with the film that put their town on the map – and there are strange disappearances, which the police seem determined to explain away.

And there’s someone – or something – stalking Lola’s every move.

The more she discovers about the town, the more terrifying it becomes. Because Lola’s got secrets of her own. And if she can’t find a way out of Harrow Lake, they might just be the death of her…

I was absolutely stoked to be invited on the blog tour for Harrow Lake by Kat Ellis, a YA thriller that many of us reading folks have been looking forward to getting our hands on. Thanks to The Write Reads for the invite, as well as the publisher for a widget which allowed me to read in preparation to the tour. Harrow Lake is set to be published by Penguin in a variety of forms on the 9th of July, you can treat yourself to pre-ordering a copy here.

Today this isn’t just a usual blog post, it’s a mini review – extract hybrid that will hopefully whet your appetite for this goosebump inducing read! Harrow Lake is a creepy read that posses some quality aspects of horror, the eeriness of a lake, a forest and a dark folklore that revolves around Mr Jitters. A girl who was sent away to live with a grandparent whom she didn’t know existed and the secrets that begin to worm their way to the surface sets for a chilling read, with an atmosphere that any classical horror fan would enjoy. The way, I found that the storyline was written could at times be disorganised and I had to re-read what I’d already read to actually understand what was going on but this wasn’t always the case. Overall, the atmosphere and the visualisation aspects of the book were written really well, I could feel the small town intensity vibes, where Lola was expected to be like the mother she didn’t really know, living up to those expectations can be difficult but add some dark secrets and jumpy events, you may need to sleep with the light on!

The earth I dry. It leaves a powdery residue, coating my fingers like ash. The hole is probably full of crawling, wriggling things, but I can’t see them, so maybe they aren’t there. I edge my arm in deeper. Where is the damn phone? How far down can it be? I flattened by body to the ground to give myself a little more reach. Then I hear a noise. Rumbling, only less rhythmic that that, and faint. It’s jarring. Like the sound a door makes as it opens late at night, slow and menacing – Are you asleep? – or the chattering of teeth.
I freeze. It’s just like how the jitterbugs sounded in Lorelai’s room earlier, their hundreds of legs tap-taptapping away inside their shells.
I need to grab my phone and get out of the woods. Out of this creepy-ass town.

see what I mean about Kat’s visually eerie writing? *Shivers*

Make sure you don’t miss out on all the previous and upcoming posts about this newest YA thriller by searching #HarrowLake on Twitter! Do you dare to read?