Well, haven’t I got an excerpt for you today! If you’ve seen my other reviews concerning the prior two novels in The Great Devil War series, you’d know that I absolutely adore the series. Due to prior commitments, I was sadly not able to review the third instalment, The Wrongful Death but I will be reviewing it in the future! The Wrongful Death was published on the 19th of March 2019, it’s available in e-book, audible and paperback format – you can grab your own copy here!
I’d like to thank The Write Reads for the invite to be on the blog tour, and for sending me a PDF copy in which I chose the excerpt (sorry about the format, I have no clue what is going on there!) 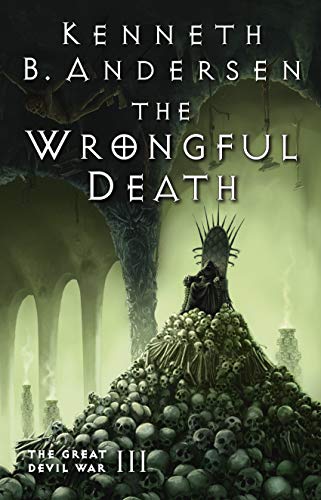 Book 3 in the multi-award winning series. Continuing the dark and humorous adventure that begins with The Devil’s Apprentice and The Die of Death.

An unfortunate chain of events makes Philip responsible for the untimely death of the school bully Sam – the Devil’s original choice for an heir.

Philip must return to Hell to find Sam and bring him back to life, so that fate can be restored. But trouble is stirring in Lucifer’s kingdom and not even Philip can imagine the strange and dark journey that awaits him.

A journey that will take him through ancient underworlds and all the way to Paradise.

The Great Devil War is a gripping and humorous tale about good and evil seen from an unusual perspective, wrapped in a fast-paced plot full of adventure, mystery, and engaging characters, and set in a world beyond your wildest dreams…

So this is the excerpt that I chose from The Wrongful Death, the great things with these books is that you could dip in mid-way through the series, but I must admit that they are best read after one another. The Great Devil War series is a brilliant, fun and atmospheric one that is pure escapism!

“I’m done with my homework—I even know it by heart!” She laughed, and he went over and gave her a goodnight kiss. She wished him “sweet dreams,” which sent a chill down his spine. On his way out of the living room, he stopped in the doorway and watched her. She had gone back to reading, and despite his shivers…(Sweet dreams) …he couldn’t help but smile. Half a year ago, she hadn’t been able to read for more than five minutes at a time. Her migraines would get too intense. Philip went to his room. The script for the play the eighth grade were putting on lay on the bed. He took the papers and stuffed them in his bag. “And they lived happily ever after,” he mocked, shaking his head. He didn’t mind having to end the story, but he thought it was a stupid line. Who ever heard of anyone living happily ever after? You only heard that kind of nonsense in fairy tales, and everyone knew it was a lie. But their English teacher had written the play, so that’s how it ended. If Philip had written it, the ending would have sounded a whole lot different. He stood in front of the window, looking out into the darkness that filled the courtyard. His reflection looked like a giant figure hovering over the playground, the benches, and the bike sheds. The moon hung above him like a strange halo. The bumps on his forehead were visible, just like the smile on his lips. “And they lived happily ever after,” he said. “Then they died, and if they hadn’t been good, they were punished for an eternity in the deepest depths of Hell. ”He bowed to the dark. “Thanks for coming.” See, that’s what you call a real ending. He picked up the strings to close the blinds, briefly glancing at the remains of the big tree in the middle of the yard…(Sweet dreams) …and once again he felt the goose bumps spreading. Lightning had split the tree in two, and half of the trunk lay on the ground, now a jungle gym used by the children in the yard. It was there, right there—under the wind, rain, and thunder—that Mortimer had stood and called for help. Called for Philip. Mortimer. Death himself. But that was a long time ago now, and Philip seldom thought about it. At least, that’s what he liked to tell himself. Maybe it was true, too. In the daytime, perhaps, but at night…At night, your mind can play tricks on you, and in dreams that turned into nightmares he often returned to Death’s basement and what he had seen in his mother’s hourglass. Those nights he awoke in a cold sweat, and sometimes in tears, too, and couldn’t calm down until he had gone to her bedroom and listened to her breathing, peacefully and deeply. I saved her, was the one thought that lulled him to sleep when he was back in his bed. I saved her. Then his thoughts turned off, and for the rest of the night, there were no more dreams. Philip shook off the rising goose bumps and rolled down the blinds. He undressed and got under the covers with a big yawn. It was incredible how tired he was. He skipped his bedtime reading and turned off the lights. He lay in the dark, clutching the rabbit’s foot that hung from a cord around his neck, and listened for the sound of his mother paging through the book in the living room. I saved her, he thought and hoped the nightmare would leave him alone tonight. Gradually, he felt himself overcome by sleep. I saved her. Philip slept. And dreamed. * * * He’s back in Death’s basement. Deep down below the earth’s surface, in a hall so gigantic, it’s hard to grasp. A radiant, eternally fluctuating light bathes the basement in a thousand shades of colour. The light in the hall comes from the hourglasses. They’re everywhere, hourglass upon hourglass, as far as the eye can see. Apart from the whispering sound of the sand that keeps running and running, it’s completely silent. No, not completely. He can hear the hammering of his own heart, too. He’s standing in front of his mother’s hourglass. I don’t want to look, he says to himself, he pleads with himself. I don’t want to see it. Only he has no choice. Even though he doesn’t want to, he looks into the hourglass and sees the image of her much too early death and—Behind him someone clears their throat, and Philip spins around, frightened. A familiar figure steps toward him. The shadows crawl around in the furrows of the expressionless face. Gray eyes observe him from under bushy eyebrows. The light in the eyes has gone out. They’re dead as stone. “You weren’t supposed to see that, Philip,” says Mortimer, putting a cold hand on his shoulder. Cold as ice. “But there’s something else you should see. ”The frosty hand gently directs him toward another hourglass nearby. Philip recognizes it; he’s seen it before. The colour of the sand in the hourglass is almost entirely black. Only a fine line of white grains can be seen within the dark mass. The bottom bulb has a tiny crack, and a bit of sand has run out onto the table.

To find out where this goes, grab a copy!
Check out the amazing reviews from some cracking bloggers by using #TheWrongfulDeath, if this excerpt won’t convince you to jump into the series now, the reviews definitely will!