Another Monday, another book review! I’m sure this level of organisation won’t occur every week and I’m sure that reviewing two Mondays in a row is just a wild coincidence! Anyways, my object of bookish desire and the subject of today’s review is the dazzling debut In The Company Of Strangers written by Awais Khan and published in the UK by Book Guild. I begun to interact with Awais recently on Twitter, when he offered me a copy of his novel, I couldn’t help say yes, the cover itself is utterly beautiful and the blurb drew me into it’s bookish clutches.

Awais Khan was born in Lahore, Pakistan. ‘In the Company of Strangers’ is his first novel 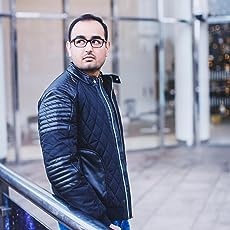 published by the Book Guild and Simon & Schuster. He is a graduate of The University of Western Ontario and Durham University. He studied Creative Writing at Faber Academy. His work has appeared in The Aleph Review, The Missing Slate, MODE, Daily Times and The News International. He has appeared for Interviews on Voice of America, Samaa TV, City42, Maverix Media and PTV Home. He is represented by Annette Crossland (A for Authors Agency Ltd, London).

In his free time, he likes to read all types of fiction, especially historical fiction and psychological thrillers. He is hard at work on his forthcoming novels. AND this is the glorious cover of In The Company of Strangers! Both the paperback and e-book of this extraordinary novel can be found and purchased here.

In the glittering world of Pakistan’s elite, all is not what it seems…

Mona has almost everything: money, friends, social status… everything except for freedom. Languishing in her golden cage, she craves a sense of belonging…

Desperate for emotional release, she turns to a friend who introduces her to a world of glitter, glamour, covert affairs and drugs. There she meets Ali, a physically and emotionally wounded man, years younger than her.

Heady with love, she begins a delicate game of deceit that spirals out of control and threatens to shatter the deceptive facade of conservatism erected by Lahori society, and potentially destroy everything that Mona has ever held dear.

In The Company of Strangers is a glitzy debut that plunges into the world of Pakistan’s elite, a life filled with glamour and a head turn away from the rules. This captivating novel beautifully describes the backdrop of Pakistan while building upon two main characters from different societal classes. Mona is a caged women living in a traditionally misogynistic world, a women trapped within a stale marriage with a man that uses her and throws her aside. She’s a strong woman but Bibal, her husband, breaks her down mainly using psychological tactics. I couldn’t help but connect with Mona, while also sympathising with her at the same time. On the flip side of the societal coin is Ali, after shock family event, he is swung into Mona’s world. As he acclimatises himself within the world of the elite, his life becomes submerged within a Lahori High Society drama that you, yourself can’t help being tantalized by.

Awais has penned a attention grabbing atmospheric novel, that is both gorgeous and dark at times. The backdrop of Pakistan creates an alluring that entraps the reader within it’s literary setting. I could feel the warmth on my skin and imagine the twinkle of my surroundings. As you can imagine, it’s very well described and written, with a beautiful prose that nudged me further into the novel. I also enjoyed the mainly dual narrative, with flecks of other narratives sprinkled throughout. The flicking between narratives worked really well, flowed eloquently and complimented one another. I just couldn’t help but love the people Ali and Mona were, they were both created with such depth with an injection of honesty and tradition. Awais has created a perfect balance of passion, humanity and scandal, I loved it!

Overall, I thoroughly enjoyed the storyline, the feel of it, the execution of it! I adored every single page, I finished this layered novel completely shocked and utterly bereft as a whole. Gripped from page one, it was a deserving first read of 2020. I can’t wait to see what else Awais has up his sleeve for his reader with his next book. Grab a copy, slip away from the real world and dip your toe in this heatwave of a fictional one.

Thank again Awais for the opportunity to read and review your debut novel, you’ve done amazingly!