Howdy readers, welcome to another throwback review in the spirit of #IndiesOfChristmas. I originally read The Playing Card Killer as part of a Random Things blog tour. I loved the book and couldn’t wait to share my thoughts about this twistingly thought provoking read!

‘The Playing Card Killer’ is written by Russell James, who has had several of his tales and short story collections published; including ‘Dark Inspiration’, ‘Outer Rim’ and ‘Cavern of The Damned’. This book was published by independent publishers Flame Tree Press on February 14th 2019, what a Valentine’s present (books over hooks as they say… okay as I say!) It’s available in several formats, including paperback and audible. You can find it here for all your purchasing needs. You can visit his here to read some of Russell’s short stories for free.

Russell R. James was raised in Long Island, New York and spent too much time watching late night horror on TV, despite his parents’ warnings. Bookshelves full of Stephen King and Edgar Allan Poe didn’t make things better (What fabulous taste he has in books!). He graduated from Cornell University and the University of Central Florida.  After a tour flying helicopters with the U.S. Army’s 101st Airborne Division, he became a technical writer by day and spins twisted tales by night.  His wife reads what he writes, rolls her eyes, and says “There is something seriously wrong with you.” I must admit, after reading ‘The Playing Card Killer’, I can understand where she’s coming from!

” Brian Sheridan may be losing his mind. 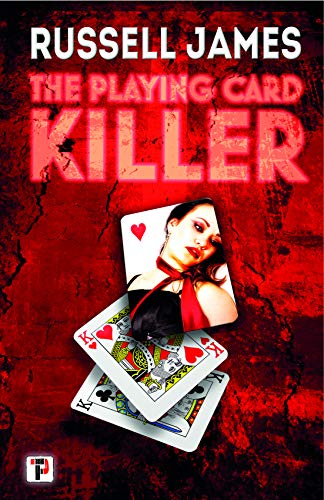 Asleep, he’s plagued by dreams of murder, women strangled with a red velvet rope then left with a playing card tucked in the corpse. While awake, he’s hallucinating that he’s being stalked by a man painted like a skeleton. It’s getting hard to know what’s real. He hopes all this is driven by his cold turkey withdrawal from a lifetime of anti-anxiety medications.  But when one of his nightmare’s victims shows up on the news, dead, Brian fears he himself may be the unwitting killer…”

The first sentence: “Amidst aisles of cheerful childhood diversions, he shopped for the perfect killer’s signature.”

That is how fast you get dragged into the deep end, it doesn’t romantically lull you into a false sense of loveliness then slap you across the face with a twist, because from the beginning the whole book is dark, piled high with twistiness and dare I say an eerie feel of sinister unreliableness?!

I felt like I had been sucked into a black and white type of cat and mouse read, it was fast paced with it’s short yet taut chapters, with the pace quickening as did my heart rate.. Brian isn’t your usual protagonist, he has a dark depth about him, mainly linked to his past. He reached a turning point when he was diagnosed with a form of mental illness, when he received treatment that enabled him to live totally independently while holding down both a job and relationship. Things begin to unravel when Brian decides that he doesn’t need the treatment anymore; he’s outgrown it. Instead of seeking medical help, he goes completely cold turkey… ah oh!

As the storyline starts to unfold, and Brian’s sanity starts to deteriorate, making me, as the reader, feel like I was holding the book tighter, gasping for breath. I needed the next revelation hit; the suspense that Robert’s words held me in was too much to bare at times, I just needed to know what happened next. Sometimes psychological thrillers can be predictable but this one had a storyline that made me question everything, the end game of this read was astonishingly impressive, sinister, as well as truly original. I felt as though i’d entered a book coma, which for you who don’t know, is so much worse than a book hangover but in a good way!

I found the characters to be really well developed, with both depth and layering. We learnt about Brian’s familial relationships, as well as his past. I highly dislike a few characters who were written brilliantly but with you disliking them in mind. Brian’s parents for one, are absolute arses! I couldn’t help but sympathise with him on so many occasions. I think you can tell when an author has put the effort in, to create characters with personalities, actions etc. that create an emotional response, whether it’s positive or negative.

I was really impressed at the extent to which Russell James had gone to research the underlying themes of this book, including the forensics involved in crime scene investigation. Some novels that involve CSI examination can blow over details involving fingerprint mutilation and variants, let alone aspects of tyre prints. I was super impressed, especially as a recently graduated forensic student!

Although ‘The Playing Card Killer’ is fictional, it is quite thought provoking, such as in terms of if evil is born; inbuilt within an individual’s DNA or made by the exposure to certain environmental factors / emotions. As a true crime junkie, I think this is one of the most interesting questions and I really enjoyed working through it from Brian’s point of view.

In a nutshell, The Playing Card Killer is a noir psychological, misogynistic, mind – f**k about fighting your demons aka. Mr Jitters, no matter how innate and woven into your genetics that behaviour may be – Nature Vs Nurture. Overall, I thoroughly enjoyed it and would highly recommend that anyone who loves a good crime / psychological thriller reads it.

I highly recommend Flame Tree Press as a publisher and this book for anyone that loves a thrilling adrenaline hit. I wouldn’t have crossed this books path if it wasn’t for Anne Cater organising the tour, so thanks Anne!

Have you read it? Is it in your amazon basket waiting to be purchased? Let me know what you thought of it!