Skip to content
Today’s Indie of the day is James. W White (or Jim), an author that was brought to my attention by a gem of an author Ariana D Den Bleyker, who is also part of the online publisher Dark Passages Publishing.
Jim is a California-based writer of historical and science fiction. He earned an MA in U.S. History. His professional career has included military service, teaching, research librarian and technical writing. Jim’s stories have appeared in Datura Literary Journal, Literary Yard, The Wapshott Press, Scarlet Leaf Review and Adelaide Books.

Jim’s latest novella, Cisco, has hit some bumps in the road but i’m hoping that when it does see the light of a book shelf that you’ll love it as much as I did. You can check out my July review here.
Jim primarily focuses on writing historical fiction occasional forays into science fiction and mystery/suspense subjects. His favourite length is novella, I have come to love these slim reading beauties, you can fit them into dress pockets, bags and even sneak them into the cinema to read during the adverts! Lately he has spent his time writing short stories and flash fiction.
Some of James W White’s works include:
Cisco

In mid-1980’s San Francisco, a repulsive criminal mastermind and a talented female detective face off, each hampered by their inept sidekicks.

Cisco is a frightening visage of towering strength topped with a face covered in hideous prison tattoos. A cleft palate emphasizes his monstrosity as he spits out garbled words. Cisco has had a long string of successful payoff for child abductions in his past, but this one is not looking good. His new protégé, Jacob, has returned with a too-young kidnapping victim. To top it off, Jacob has left evidence behind. “Weeers hees shoo?” demands an enraged Cisco, when three-year old Henry Peterson is presented to him shoeless on one of his little feet. Both innocent Henry and blundering Jacob are in for a world of hurt very soon.

Cisco orchestrates an unusual method for collecting the ransom in broad daylight and right under the noses of the cops. He leaves Henry behind, but takes Jacob and a vehicle full of hostages with him. McCurda and Bishop find themselves in pursuit blocks away from each other, baffled as to the whereabouts of both Henry and the car with Cisco and his hostages. Danger, threats, gunfire and death conclude the day in the Mission district.

Meanwhile, little Henry Peterson rests on a city bus heading away from the raging battle and into the arms of a well-meaning, but clueless young stranger

Private Johnny Zewiski stands above a polluted river, his hands tied behind his back. It’s a cold afternoon in war-torn Warsaw, Poland. In front of him, beyond the river, smoldering ruins echo the sound of small arms fire. Behind him, a Nazi machine gun crew hastily assembles their weapon, anxious to finish the execution and get back to shelter. Ex-private, actually. Johnny had deserted his post and fled his Army unit under wartime circumstances, thereby sealing his fate, no matter who took the trouble to capture and put him front of a firing squad. He fled with honorable intentions, he thought, but the war didn’t care about honor. His only friend, Jakub, another displaced Polish-American, stands next to him, kvetching about unrequited miracles. Johnny’s journey, from his boyhood home in Allentown, Pennsylvania to Warsaw, is a crazy ride of miraculous encounters. It begins in Tunisia, then across the North Sea, through the heart of Nazi-occupied Poland, and winds up in the arms of the embattled Polish resistance who are desperately trying to defend their capital until the Allied armies can save them from the Nazi onslaught. He dreams of home while waiting for the bullets to fly; his mother and father who cried while their former homeland turned to rubble, his brothers who warned him not to go near the recruiting station and his girlfriend who followed him in his tortured dreams and begged him to come home. When the machine gun fires, Johnny’s fate takes yet another turn and he begins a new journey that’s just as dangerous and ill-conceived as the last.

The vision haunted him the rest of his life – a sailboat capsized, people bobbing helplessly in the cold Atlantic, their cries fading in the wake of the luxury liner that was taking him to Europe. Twelve year old Bridge Appleton weeps when his father 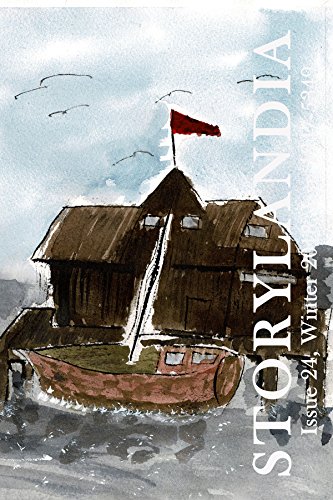 ushers him away from the gruesome scene to join his family for dinner on the luxurious SS Normandie. He begs his father to alert the captain, only to be admonished for annoying his mother and upsetting the evening’s festivities.

Bridge obediently accepts his parent’s wishes, but he doesn’t forget. Now a young man living in 1930s Los Angeles, Bridge overcomes his fears, his friend’s disapproval and the warnings from his mother and buys his own sailboat. Swept into a romantic dream, far removed from reality, Bridge envisions a care-free, seafaring life shared with his friends and his girl, Deborah, until reality catches up with him and thrusts him back to the catastrophic vision of his youth, nearly taking his friends with him.

Jim White can’t spell, he has a hard time keeping names and places straight and organization is a challenge for him. But he loves to write and can tell a good story. After thirty years writing for the wrong reasons, he said good bye to a technical writing career in Silicon Valley and started writing for himself. He’s never turned back.

“In Borders in Paradise, James White takes us first to depression-era Southern California, where we are quickly plunged into a setting of palm trees and wealth versus the trials and tribulations of a displaced Texas family. Next, it’s on to the blistering heat of Arizona’s southern border. White has researched both areas and the era well, especially the history of the U.S. Border Patrol and the pre-WWII U.S. Army. And he has brought us a cast of original and believably flawed characters.” (Toni Morgan, author of ‘Patrimony,’ ‘Two-Hearted Crossing’ and many other books) James White has written a story that sets the stage to capture the myth and glamour of the American West in the years leading up to World War II. Then, with sleight of hand, he lifts the curtain and shows the unvarnished truth behind his characters’ motives and actions. In Borders in Paradise, the reader is treated to memorable scenes that appear to secure us in the nostalgia of a bygone era, yet time and again sets us loose in real life, which is often messy, unpleasant and even violent. Under the surface, the glitz of Hollywood, the grit of the U.S. Border Patrol, and the grind of the U.S. Army on the verge of war are revealed to be more alike than we might imagine.

So there you have it, your seventh indie author spotlight is James  W White, Ii would highly recommend checking his work out as well as keeping your fingers and toes crossed that one day you’ll be lucky enough to read the dark, twisted noir that is Cisco. Make sure to follow James on Twitter for any bookish development information!