What’s your favourite type of post? Mine is of the surprise book post, which is exactly the kind of post Karen from Orenda Books sent my way back in April. I jumped up and down like a cheerleader while squeezing like the little book piglet that I am! One of the books in the coveted parcel was The Closer I Get by Paul Burston, you can find my review here. The second thrilling read was, yes you’ve guessed it, The Last Stage by Louise Voss and it did not disappoint. You can order your e-copy here directly from the Orenda e-store, or if you love the smell of a good physical book, you can order one here from indie booksellers Bert’s Books. This is Louise’s second Orenda-born reads with the first being The Old You, you can read my review here. 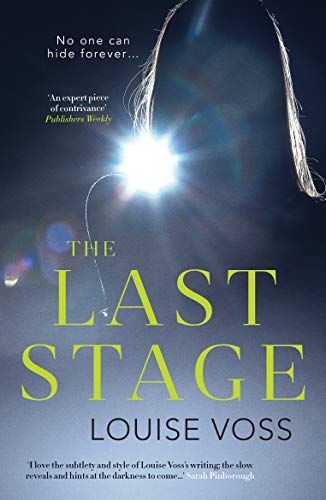 A violent and horrific incident forces a young woman to go into hiding, at the peak of her career as lead singer of an indie pop band. Years later, strange things start to happen and it becomes clear that some know who she is…

At the peak of her career as lead singer of a legendary 1980s indie band, Meredith Vincent was driven off the international stage by a horrific incident. Now living a quiet existence in a cottage on the grounds of an old stately home, she has put her past behind her and come to terms with her new life.

When a body is found in the manicured gardens of her home, and a series of inexplicable and unsettling events begins to occur, it becomes clear that someone is watching, someone who knows who she is … Someone who wants vengeance.

And this is only the beginning…

*Stands up clapping* Louise has absolutely blown my mind out of the water, that is all! Okay, I’ll tell you why, that’s what we are here for right? I was like a fish on a hook from the prologue, you know that something disturbing has been shifted into motion but you have no clue how this will surface throughout the read. We are aware that Meredith has experienced a horrific event during her time as the lead singer of her band but the what and who are complete mysteries. This plotline itself creates an eerie atmosphere as the bogeyman’s identity is hidden with increasingly intense moments that you can’t help hold your breath at.

The narrative is cleverly tossed from past to present and from character to character; Meredith, the at times unreliable female protagonist who’s experiencing deeply unsettling event personally and second handed. The way the plotline is written adds further to the tension, as well as colouring in the whole picture one colour at a time. The events were plausible and the characters were created with such depth, that you can’t help but be tugged into the story.

The Last Stage is a completely enchanting, believable read that focuses on the campaign of harassment that many individual’s in the spotlight may have become victim of. Also, what’s scarier than a faceless unknown? NOTHING! Louise has created a perfectly paced, psychological thriller with a poisonous serpentine under current that will sweep you into a dark unknown. Every single aspect worked; from the characterization to the histories of those involved. Grippingly taut read that captivated me until the very last page…. and even afterwards, the writing is superb, gritty and absorbing from page one, another full star house for an Orenda Read!

I’ve also been lucky enough to grab Louise for an End of World Books instalment, where I’ve asked her to choose only five books that she’d pack in an emergency, check out what ones she chose here.

*Whispers* have you treated yourself to a Voss read yet? Or maybe both?

Keep up to date with all things Orenda Books this October using #Orentober, please use that hashtag when retweeting and sharing your Orenda book shelfies etc. It really helps spread the book love!