Welcome to my blog today for my turn on the *drumroll please* this is my first ‘Throwback Thursday’ of the month where you can catch up on some previous reviews of some cracking Orenda books that you may have missed first time around! Kicking it off in style is my review of the wonderful Louise’s Call Me Star Girl where you can purchase a physical copy here or you can go through Orenda’s Ebookstore here! HIGHLY RECOMMENDED! 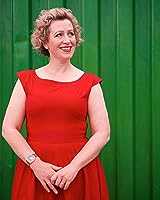 Louise Beech is an exceptional literary talent, whose debut novel How To Be Bravewas a Guardian Reader’s Choice in 2015. The sequel, The Mountain in My Shoe was shortlisted for the Not the Booker Prize. Her third book, Maria in the Moon was widely reviewed and critically acclaimed. Her short fiction has won the Glass Woman Prize, the Eric Hoffer Award for Prose, and the Aesthetica Creative competition, as well as shortlisting for the Bridport Prize twice. Louise is currently writing her next book. She lives with her husband and children on the outskirts of Hull – the UK’s 2017 City of Culture – and loves her job as Front of House Usher at Hull Truck Theatre, where her first play was performed in 2012.
Follow Louise on Twitter @LouiseWriter and visit her website: www.louisebeech.co.uk. 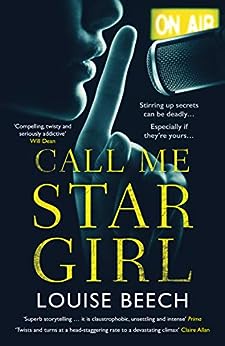 Call Me Star Girl has very recently won the Best Magazine’s Book of the Year award, fully deservingly so and it is currently 99p for kindle readers on Amazon! You can find Louise’s acceptance speech here!

“Tonight is Stella McKeever’s final radio show. The theme is secrets. You tell her yours, and she’ll share some of hers.
Stella might tell you about Tom, a boyfriend who likes to play games, about the mother who abandoned her, now back after fourteen years. She might tell you about the perfume bottle with the star-shaped stopper, or about her father …
What Stella really wants to know is more about the mysterious man calling the station … who says he knows who killed Victoria, and has proof.
Tonight is the night for secrets, and Stella wants to know everything…“

This was the first of Louise’s book that I have read and it certainly wasn’t the last, I was completely blown away at how this thriller was so beautifully written to the point that I felt emotional several times due to it’s poetic execution. Louise truly has a talent for weaving tales that will leave you completely stunned and wanting more. I will definitely be delving into her back catalogue of novels!

The storyline is filled with suspense that teeters on the line of whether secrets should be shared or if it’s selfish to do so. There’s been a murder, a girl found dead in an alleyway close to where Stella works – she host a nightly radio show called ‘The Stella McKeever Show’. On her last show, Stella’s themes are secrets, if you share yours, she’ll share hers. But should all secrets be shared? Stella get a call every Friday from a man who claims to know who killed #TheGirlInTheAlley as she’s come to be known. Stella knows this guy waits for her outside work, the calls are eerie themselves. This left me as the reader hooked completely to the storyline, the suspense was killing me!

The dual storyline is told from the point of view of Stella and her mother Elizabeth; both of these narratives allows the reader to delve further into the life of Stella, as well as seeing the developing storyline from various angles, which was excellent! I loved the glimpses of the storyline from Elizabeth POV, including the events around Stella’s birth, her upbringing, as well as their mother / daughter relationship. The whole dialogue embraced a calipso of emotions that drew further investment from the reader into Stella’s Story. My intrigue was peaked, I couldn’t help but steam through the book in a day!! I know the phrase is thrown about a lot but Call Me Star Girl was quite unputdownable. The chapters were short and snappy, the storyline was easy to follow and the way it started to develop / unravel was natural and not forced. A really clever adrenaline inducing, heart racing read!

A fellow blogger told me that Louise’s books is as close to perfect as you can get, I completely agree, it’s has all the stars from me! *Cough* Mart!

Call Me Star Girl is a treat! You all need to read it! Louise is one of the most literary diverse writers that I have ever come across! A complete treat!