It’s that time again, it’s time for the third instalment of my new bi – weekly blog series that I like to call End of World Books. This series is when I ask my victims… I mean my guests to chose only five books that they would pack in the case of an apocalyptic event. Some bloggers are finding it more hard than others… oops! If you missed it, my friend Rachel was the first blogger to take the plunge. You can check out her choices here.

Kelly panicked about the five book only rule and took advantage of the loophole of multiple book in one bound book (damn it) but fair is fair, only five bound books was allowed, so I let her have it. Although she said that five books wasn’t enough, she has refused to sacrifice her food for an extra read. That’s my girl.

I too fall victim to the hangry monster…. yes it is a thing!

If you’re not acquainted with Kelly or her blog From Belgium With Book Love, why the hell not?! You should immediately jump over there now, follow and have a nose at all her wonderfully written bookish posts. You can thank me later. Without further ado, here are Kelly’s bookish choices.

What five books would you take? What a question! I don’t suppose I’m allowed to take my Kobo with loads of books on it? Sigh, no didn’t think so! At first I was thinking I’d take my favourites. But then where would I even begin?! I wasn’t able to get my list of 2018 faves down to five, never mind picking five all-time faves! So I decided to choose books with a special meaning instead:

The Diary of Anne Frank

A deeply moving and unforgettable portrait of an ordinary and yet an extraordinary teenage girl.
First published over sixty years ago, Anne Frank’s Diary of a Young Girl has reached millions of young people throughout the world.
In July 1942, thirteen-year-old Anne Frank and her family, fleeing the occupation, went into hiding in an Amsterdam warehouse. Over the next two years Anne vividly describes in her diary the frustrations of living in such close quarters, and her thoughts, feelings and longings as she grows up. Her diary ends abruptly when, in August 1944, they were all betrayed.

I got it as a present when I was twelve and it had such an impact. It’s been a while now, but I must have read it dozens of times. It’s the oldest of my books and I’ll treasure it forever. Talking about it makes me realise I really want to re-read it now!

Gone with the Wind by Margaret Mitchell 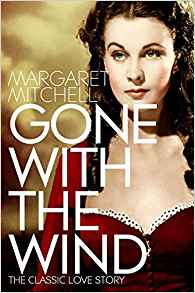 Set against the dramatic backdrop of the American Civil War, Margaret Mitchell’s magnificent historical epic is an unforgettable tale of love and loss, of a nation mortally divided and a people forever changed. Above all, it is the story of beautiful, ruthless Scarlett O’Hara and the dashing soldier of fortune, Rhett Butler.

My mum has had it for ages and as a teen I read it a bazillion times! I was completely obsessed with it, even made notes about all the characters and typed them out on my mum’s ancient typewriter. I’ve only read it in Dutch and I’ve been meaning to read it in English for ages. It’s on my Kobo and I hope to get to it this summer!

The Lord of the Rings trilogy by J.R.R. Tolkien (it’s not cheating, it’s bound in one book!)

All three parts of the epic masterpiece The Lord of the Rings – The Fellowship of the Ring, The Two Towers & The Return of the King – available as one download, featuring the definitive edition of the text, hyperlinked footnotes and page references, and 3 maps including a detailed map of Middle-earth.
Sauron, the Dark Lord, has gathered to him all the Rings of Power – the means by which he intends to rule Middle-earth. All he lacks in his plans for dominion is the One Ring – the ring that rules them all – which has fallen into the hands of the hobbit, Bilbo Baggins.
In a sleepy village in the Shire, young Frodo Baggins finds himself faced with an immense task, as the Ring is entrusted to his care. He must leave his home and make a perilous journey across the realms of Middle-earth to the Crack of Doom, deep inside the territories of the Dark Lord. There he must destroy the Ring forever and foil the Dark Lord in his evil purpose.

As a teen I read pretty much anything my local library had in stock, regardless of genre. Still, getting a bit older I somehow completely forgot I loved fantasy. As such, I refused to watch The Fellowship of the Ring, until my then boyfriend managed to persuade me to watch it on TV and dear lord, what an epiphany it was! I watched The Two Towers immediately after and obviously it did not bear thinking about waiting until The Return of the King hit the theatres the next year, so I got the book, and I was positively smitten! I fondly remember that long, hot summer, reading The Lord of the Rings on the lawn. It was bliss before all hell broke loose (the BF and I broke up but that’s a story for another day ;-)).

Harvard professor Robert Langdon receives an urgent late-night phone call while on business in Paris: the elderly curator of the Louvre has been brutally murdered inside the museum. Alongside the body, police have found a series of baffling codes.

As Langdon and a gifted French cryptologist, Sophie Neveu, begin to sort through the bizarre riddles, they are stunned to find a trail that leads to the works of Leonardo Da Vinci – and suggests the answer to a mystery that stretches deep into the vault of history.

Unless Langdon and Neveu can decipher the labyrinthine code and quickly assemble the pieces of the puzzle, a stunning historical truth will be lost forever…

I have a master’s degree in Translation Studies and my fourth and last academic year I spent A LOT of time working on my thesis, which consisted of a few translations for the local autism organisation, and terminology research. For a term to be added to the official term base I needed to provide three contexts in both English and Dutch. In practice that meant lots of reading, but not exactly the most riveting material! By the time I’d finished I couldn’t be bothered to read anything, autism-related or otherwise. The day of my last exam I went into the city, ended up in a bookstore, and bought The Da Vinci Code, I flew through it and it reminded me of how much I loved reading, and it felt like I had found myself again. I will forever have a soft spot for The Da Vinci Code for making me fall in love with reading again.

The Lion Tamer Who Lost by Louise Beech

Long ago, Andrew made a childhood wish, and kept it in a silver box. When it finally comes true, he wishes he hadn’t…

Long ago, Ben made a promise and he had a dream: to travel to Africa to volunteer at a lion reserve. When he finally makes it, it isn’t for the reasons he imagined…

Ben and Andrew keep meeting in unexpected places, and the intense relationship that develops seems to be guided by fate. Or is it? What if the very thing that draws them together is tainted by past secrets that threaten everything?

This was my book of 2018. It made me laugh, it made me cry and most importantly, it (re)opened my heart and my mind to other genres. I had been obsessed with thrillers and I had forgotten that other genres could be just as suspenseful and thrilling. The Lion Tamer Who Lost taught me not to focus so much on genres, and not to be deterred so easily. It lead me to a new favourite author, and confirmed that I was right to have faith in Orenda Books.

So there you have it, Kelly’s haul of books that she would grab if she had to escape in an apocalyptic event. I think she has most genres covered for mood reading…. Are you packing tissues for possible *weeps* Kelly?

I’ve linked in all the books Kelly has chosen, just incase she’s tempted you into jump over to Amazon and purchase one or all five. Have you read them already? What did you think? Remember you can follow Kelly on a multitude of platforms, I’ve linked in her social media below:

Thank you again Kelly for taking part! Make sure you keep an eye out for the next post on the 28th of July!