It’s here! The final instalment of my Malone Monday blog series! I devoured A Suitable Lie, House of Spines and After He Died in a week, all of which had twisted meaningful themes into psychological thrillers. Usually three thrillers in one week would have been difficult, I find at times they tend to merge into one psychological glup. I didn’t find this at all with these three reads, each book had its own defining qualities which gave them complete independence from one another. You can catch up with my two previous reviews below:

After He Died is the most recent of Michael J Malone’s work, it was published by Orenda Books in 2018. This was the book that has made me a firm fan of Michael’s work! You can treat yourself to an ebook version here, or if (like me) you love to read a physical book, you can purchase a copy here.

You need to know who your husband really was…

When Paula Gadd’s husband of almost thirty years dies, just days away from the seventh anniversary of their son, Christopher’s death, her world falls apart. Grieving and bereft, she is stunned when a young woman approaches her at the funeral service, and slips something into her pocket. A note suggesting that Paula’s husband was not all that he seemed…

When the two women eventually meet, a series of revelations challenges everything Paula thought she knew, and it becomes immediately clear that both women’s lives are in very real danger.

Both a dark, twisty slice of domestic noir and taut, explosive psychological thriller, After He Died is also a chilling reminder that the people we trust the most can harbour the deadliest secrets…

I practically inhaled After He Died, I read it in a day – all free time was used to gorge on the chapters as Paula Gadd tried to uncover the looming mystery over her husband’s death. Again, as with my previous three Malone reads, the language and visualisation that has been injected into the literary dialogue is hugely emotive, as well as being blissfully unsettling. I found this novel to feel more of a domestically noir thriller that just a psychological one. It is true, with each book Michael J Malone has gone from strength to strength while still allowing his poetic ability to shine through.

I quickly become engrossed in the life of Paula, especially after she is approached by a young woman at her husband’s funeral who told Paula “You need to know who your husband really was” from that point onwards the spidey senses were on full alert as I frantically tried to connect all the dots, but let me tell you now, After He Died is taut, sharp and unbelievably unpredictable. The book will have you fully absorbed, dangling of your seat with reader’s hand cramp and you’ll love every single page of it.

The characters that stood out for me was definitely Paula and Cara, they seemed to be complete polar opposites but they complimented one another as their parallel narratives begun to collide in a jaw dropping way. Paula is quite soft and naïve, whereas I found Cara to be headstrong and intellectually sharp. Two women, two very different backgrounds but with the same goal. Michael has stitched a web of secrets, lies and revelations into a storyline drenched with mystery and murder – you can see where the noir feels come from now right? As with A Suitable Lie and House of Spines, After He Died is written with such elegant prose that you can’t quite believe it’s a thriller until the atmospheric darkness creeps up on you, page by glorious page.

I have fallen in love with Michael J Malone’s writing, I am now forever a Malone fan! I highly recommend taking a dive into the back catalogue of books, you won’t regret it – I on the other hand regret waiting so long to read any of Michael’s books! Try them out and you’ll definitely be #TeamMalone in no time! Remember Michael J Malone’s newest psychological thriller In The Absence of Miracles is out on the 19th of September in paperback (*screams*) or if you can’t wait it is out in ebook THIS MONTH (*screams again*)! Buy them all, like a mid year bookish Christmas! 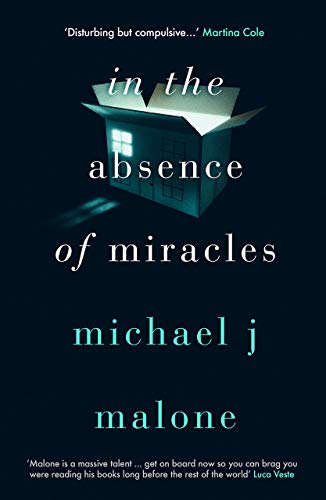 It’s been an absolute pleasure binge reading and reviewing Michael’s work and I can’t wait to read future works!