Who doesn’t love a read that has been labelled as ‘The Breakout Thriller of 2019’? That alone sets the book bar relatively high and wow did this read deliver. It has been suggested that 1 in 100 children in the UK grow up to be psychopaths, which is terrifying in itself but The Dangerous Kind will have you second guessing everyone you meet whether they are or aren’t. This read suggests that we all know a psychopath but it takes that extra f-ed up individual to cross the boundaries to full on psycho.

The Dangerous Kind was published by Bonnier Zaffre (who I’d like to thank profoundly for my proof copy!) in e-book and hardback format yesterday; the 16th of May. Yes that’s right, you can grab a highly anticipated copy now by clicking here and being transported to amazon or Waterstones. 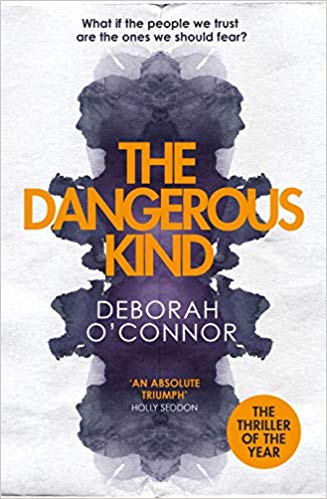 “What if the people we trust are the ones we should fear? We all recognise them. Those who sit just on the fringes of society. Who send prickles up the back of our necks. The charmers. The liars. The manipulators. Those who have the potential to go that one step too far. And then take another step.

Jessamine Gooch makes a living from these people. Each week she broadcasts a radio show looking into the past lives of convicted killers; asking if there was more that could have been done to prevent their terrible crimes. Then one day she is approached by a woman desperate to find her missing friend, Cassie, fearing her abusive husband may have taken that final deadly step. But as Jessamine delves into the months prior to Cassie’s disappearance she fails to realise there is a dark figure closer to home, one that threatens the safety of her own family . . . ”
My Thoughts

We are initially told of a scene which occurs between two unknown individuals who appear to know one another, their meeting ends in the most shocking way. From that point the storyline had 100% of my attention, I couldn’t wait to see where this psychological thriller was going to take me.

The first known character we are introduced is Jessamine, who is a bbc radio show presenter of a segment concerning retrospectively, called ‘Potentially Dangerous People’ that delves in to the lives of convicted murderers and with the help of an ex – police officer and a criminologist discuss how their behaviour could have been avoided or if identified early on, could it have potentially prevented the crime from occurring. Jessamine is approached by a big fan of her show, Marnie Clark, who is seeking help to find her friend Cassie Scolari, who has gone missing, possibly at the hands of her physically abusive husband.

The storyline is written in both past and present tense; present day and 2002, where the we follow the life of Rowanda, whom is put into an awful situation by her partner and the person that she loves more than anyone in the world. Reading about her life tugs so hard at the heart strings, the position she was put in and her experiences are shockingly sad.

This whole read is the embodiment of a truly fantastic thriller! Usually i’m asleep by 11pm, 2am for two nights in a row I stayed up to devour this raw read. How I’ve not read Deborah’s ‘My Husband’s Son’ I do not know but it’s going straight into my basket and onto my TBR pile. I’d like to know how many hours, days, months of planning went into The Dangerous Kind because it is perfect and engaging.

The storyline was like a train crash (in the best way!) that you just could not look away from… or in this case put down. It’s based on a subject that should be brought to societies attention I feel, it’s something that has the potential to happen to anybody and I think that brings in the emotional rawness of the read. It’s eye opening to say the least.

The primary underlining theme of the storyline is sexual abuse of minors, and the behaviour that goes into such crimes, such as grooming. At parts of the read you can feel yourself getting chilly due to the complete heartbreak that is endured, not just by fictional characters but by real people. A hard hitting storyline!

Great characters, the flicking from past to present, as well as little details, such as family life, helps build both an image of the character in your head but it also tension builds to an extent because you just aren’t aware where the hell the story is going! The twists will have you being able to hear your pulse in your ears as well as having your heart pounding. Quoting a fellow blogger at Rachelreadit ‘Holy s**t’!

I hope that you’ve enjoyed my review of The Dangerous Kind by Deborah O’Connor and decide to put it on your TBR pile when it’s released in May! I’m going to catch up on some sleep and nudge away this book hangover! Whatever you’re reading today,