I’d like to thank Wildfire Books for a paperback copy of Phoebe Locke’s most recent novel The Tall Man, it’s previously been published in hardback, e-book and audible format but tomorrow it becomes available in paperback – if you’re anything like me I do prefer a PB over a HB! So congratulations Phoebe on your PB publication day for tomorrow!! 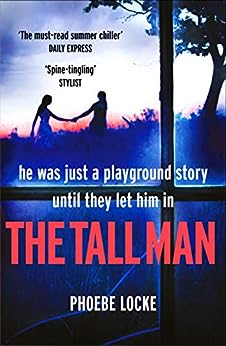 If any of you have a fear of tall shadowy figures you should read this review with the light on because this psychological thriller got me in the fear feels! The Tall Man aka The Slender man myth as a child freaked me out, if you’re unaware of it you can check it out here!

This is what the book is all about:

“They went looking for a story. What they found was a nightmare.
It started as nothing, just a scary story passed around between schoolchildren. But for Sadie and her friends, the rumours soon became an unhealthy obsession – and the darkness all too real.
Years later, Sadie’s teenage daughter Amber has been charged with murder, and her trial shocks the world. How could such a young girl commit such a terrible crime?
It seems the secrets of Sadie’s past have come back to haunt her daughter. And the terrifying truth of what happened all those years ago is finally about to come out .

First things first, I need to inform you that this book is the definition of psychological suspense thriller and I think that is the worse type of thriller because it gives you enough information for you to form a spine chilling image in your own mind based on your conceptions. I thought about this book long after I tuned the last page, it’s a read that will scare you and keep you imagining the tall man *shivers*!

The storyline consists of multiple narrators over a varied time span, from when Sadie, Amber’s mother when she is born, over the years, Amber who is acquitted of murder and Miles. This definitely allows the storyline to take on a more three dimensional premise, especially as it weaves the events together from the POV of others. The novel begins with Sadie who has heard the story in the playground about ‘the tall man’ who takes disobedient daughters and makes them special. Fast forward to Sadie giving birth to her daughter Amber where Sadie become erratic and distant, questioning post-natal depression but what accounts to the fear that the myth of her worst nightmare may come after her daughter.

The characterization of all those involved worked really well, you felt an array of emotions towards the characters which changed throughout the read. I could have given Sadie a few cuddles throughout! The tall man myth creates many underlying themes, such as that of paranoia and delusions which frequently arise during this novel. These instances left the hairs on the back of my neck stood up tall, that and Locke’s attention to literary detail and planning of this this creepy thriller that will have you locking and double locking your doors and windows, leaving you with an unsettling feeling, I wouldn’t advise reading before bedtime but I do recommend for daytime reading, unless you like reading on the wild side! *shivers again*

Mighty fine read, if you’ve read and loved this psychological novel, Phoebe Locke’s next book; July Girls is out on the 24th of July with the tagline:

“Every year, on the same night in July, a woman is taken from the streets of London; snatched by a killer who moves through the city like a ghost”

You can pre – order here!