I am so happy to be reviewing a purchased book today, I bought ‘Adèle‘ by Leïla Slimani from Waterstones; buy one get one half price how could I say no? A fellow book blogger recommended it and I was sold. Leïla Slimani wrote ‘Lullaby‘ that was published last year. A heart – racing thriller that is 180 degrees different from the themes and storylines included in Leila’s newest novel ‘Adele’ that was released this year. You can purchase your copy here, in either paperback, kindle or audible format.

“Adèle appears to have the perfect life. A respected journalist, she lives in a flawless Parisian apartment with her surgeon husband and their young son. But beneath the veneer of ‘having it all’, she is bored – and consumed by an insatiable need for sex, whatever the cost. Struggling to contain the twin forces of compulsion and desire, she begins to orchestrate her life around her one night stands and extramarital affairs, arriving late to work and lying to her husband about where she’s been, until she becomes ensnared in a trap of her own 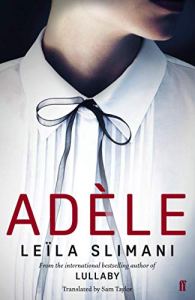 A contemporary fiction that speaks about the hunger of addiction as well as the mentality that goes with it. Including the feeling of loneliness and disconnection even when you’re in a room filled with people who love you.

Adele isn’t just a story about a ‘sex crazed’ woman, it’s about everything that goes into that – about how women who are addicted to sex are seen as promiscuous and easy, whereas their male counterparts are exploratory and attractive. Adèle is accepting this perfect life with the freedoms to live with financial stability with the social life many individual’s would dream of, but she’s chasing a demon, the thrill of random sex, always pushing the boundaries further and further, even sustaining injuries from the rendezvous. This behaviour is then followed by disgust of her sexual partners and emptiness. At one point she talks about hunger, she likes going hungry and then conquering her need to eat, I think this is the way to prove that she has control. Although I also feel like this a euphemism for her addiction to sex?

Although at times it appears Adele is completely heartless, she isn’t; she feels guilt and sadness for her behaviours and how it affects her family; she cares about her husband and son dearly, she hoped that they would cure her but she’s just not able to keep beyond the line. She tries, my god she tries. This book shows that addiction isn’t always an overt, observable behaviour, it is deep, psychologic and woven into the individuals with no way of escaping. The narrative is raw and filled with emotion, Leila has cleverly articulated a tale that feels real, well I suppose for many that it is real which is hugely sobering. This novel shows that Leila has the ability to write various genres that can touch a nerve.

Have you read Adele? What did you think? Let me know! The storyline is blushingly good with a raw underlying theme. Could it be your next book club read?