Welcome to The Reading Closet on my day of the ‘A Gift for Dying’ by M.J Arlidge blog tour! Many thanks to Tracy for having me on-board this fantastic tour and Michael Joseph over at Penguin Random House UK for an electronic copy of this highly anticipated thriller via Netgalley in exchange for an honest review!

For those of you who don’t know, MJ Arlidge has released a new standalone thriller (exciting isn’t it!). ‘A Gift for Dying’ was published on the 7th of March in hardback, ebook and audible. What are you waiting for? The link here will transport you to the realm of purchasing!

If you’re a newbie reader, you may not be aware of who MJ Arlidge is, well, he is a man of many talents! He has worked in television for the last fifteen years, specializing in high-end drama production, including the prime-time crime serials Torn, The Little House and Silent Witness. Arlidge also pilots original crime series for both UK and US networks. In 2015 his audio exclusive Six Degrees of Assassination was a Number One bestseller.

His first thriller, Eeny Meeny, was the UK’s bestselling crime debut of 2014. It was followed by the bestselling Pop Goes the Weasel, The Doll’s House, Liar Liar, Little Boy Blue, Hide and Seek, Love Me Not, and Down to the Woods.

‘A Gift for Dying’ is MJ Arlidge’s first standalone thriller novel, and I’m really hoping that it’s not his last! Just check out the blurb!

“Adam Brandt is a forensic psychologist, well used to dealing with the most damaged members of society.

But he’s never met anyone like Kassie.
The teenager claims to have a terrible gift – with one look into your eyes, she can see when and how you will die.

Obviously, Adam knows Kassie must be insane. But then a serial killer hits the city. And only Kassie seems to know where he’ll strike next.

Against all his intuition, Adam starts to believe her.
He just doesn’t realise how deadly his faith might prove…” 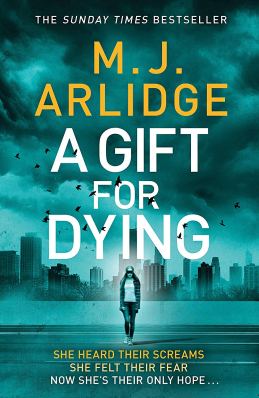 What a fantastic way to begin a loving bookish relationship with MJ Arlidge’s work but with his first stand alone thriller, ‘A gift for dying’, the book quite literally blew my socks off! I heard someone comment the other day that thrillers are all the same, WRONG in this case! A Gift for Dying has not only murder but a spiritual element in the shape of (name) who has the ability to see the death of an individual. The tagline is:

“She heard their screams, she felt their fear, now she’s their only hope…”

Teamed up with a psychologist, Adam, Kassie, a 15 year old, races against time to help save the victims of some masked evil. This edge of your seat read will leave you dry mouthed, as you read it with your chin on the floor. Not only is the storyline different, but it’s bloody brilliant! MJ Arlidge has written a type of thriller that will pass you through a kaleidoscope of emotions, including buckets of sympathy for our female protagonist Kassie due to her strained relationship with her *insert curse word* of a mother, as well as heart racing fear of the developing gruesome storyline. Arlidge does not hold back on the sadistic killings; blood, gore or violence included, which is always a plus for me.

The storyline is written from various points of view, including Adam and his wife Faith, but it’s not forced or difficult to follow. The whole narrative flows perfectly without getting the reader in a confused reading frenzy; it’s then finished neatly with a bow. If you’re in the market for a thrilling read that is filled to the brim with everything murderous, suspicious and unpredictable, choose this read! Be warned though, this is a book that you’re not going to want to put down until the last page, and if you’re anything like me, I inhaled in within a 48 hour period!

Thankyou again Tracy for the opportunity to be on the blog tour for this star of a book! Hugely recommended for thriller readers! To be kept in the loop of all things Matthew Arlidge, follow him on twitter @MJArlidge. This was my first MJ Aldridge but it will most definitely not be my last, now if you excuse me, I have a back catalogue to purchase! Also, make sure to follow the rest of the blog tour!