It’s that time of the week where I share a review of a wonderful (*cough* dark) #Fahrenbruary read. Today it’s ‘Drawing Dead’ by J.J.DeCeglie, as if you haven’t already noticed! I’m trying to squeeze in reads and review around blog tour reads, I was under – prepared and next year I promise to be more organised, aka. not take on any tours for March! I applaud the bloggers who are producing fabulous Fahrenposts for everyday this month, such as Mart over at The Beardy Book Blogger Blog and Matt over at It’s an Indie Book Blog. They’ve been super impressive this month, as well as Fahrenheit Press and F13Noir, who have been raving about the fantastic reviews, as well as their fabulous collection of noir novels! Team work makes the dream work. 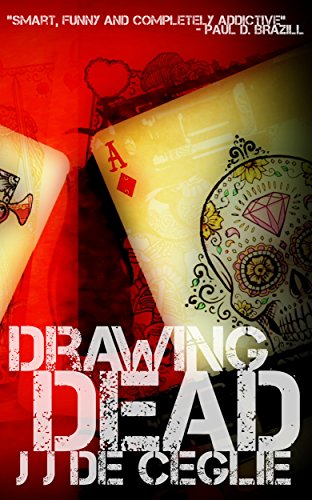 What has begun to be a trend, for me, concerning Fahrenheit reads is that I can’t seem to read them bit by bit, because they grip you by the reading gonads until the very last page. ‘Drawing Dead’ was no different.

Firstly, can we just appreciate that fine ass cover? If you’re anything like me, 7 / 10 times I will choose a book by it’s cover. With this read it was 50 / 50 cover and blurb that drew me in and sent it straight to my Fahrenbruary basket! The Blurb:

Haunted by the suicide of his teenage girlfriend and in hock to a gangster, Jack meets a femme fatale who offers him a case that might just solve his problems once and for all.”

I’ve recently been introduced to femme Fatale type reads, I must say that I am not disappointed! It’s so refreshing to read about a female character (s) having a bit of power over the male character, which almost never happens in mainstream published crime thrillers. This is one of the reasons that I have begun to love noir and part of the reason I loved ‘Drawing Dead’. Jack Andrelli, the main protagonist is a self confessed arsehole, he’s a big mouthed, handsome guy who loves womanizing and gambling. With these characteristics and the introduction of a gangster, violence and a lot of sex, you can’t help but feel like the book is a hybrid between Pulp Fiction and The Godfather in areas. JJ DeCeglie managed to create a noir narrative with the perfect balance of humour and darkness, it made the reading experience an enjoyable one. I both gasped and giggled throughout the read, although there was way more gasping!

I couldn’t help but feel sympathy for Jack, he’s leading a shitty life; his teenage girlfriend killed herself, he has a gangster chasing after him due to owing an obscenely large amount of money and his overall self – hatred is causing him to spiral out of control, short of losing his mind…. or has that happened already? And just when you get comfortable, thinking you know exactly where this crazy train is heading, you get smashed of the track by a tidal wave. I bet you’re thinking where did the tidal wave come from…. exactly, it’s completely unexpected and equally as clever.

What I think I love most about Fahrenheit reads, and with ‘Drawing Dead’ is that there is no such thing as ‘a slow start’, the nitty gritty begins at the beginning with no need for introductions and small talk. JJ obviously planned the storyline immensely to every detail, I wonder what his book planning method is?

Overall, I thought ‘Drawing Dead’ was a read filled with dark elements which was a fantastically dark and compulsive read. I thoroughly enjoyed my joyride read with Jack. I loved the read so much, I’ve sent it across country lines to one of my favourite bloggers in London, so we can rave about it together! Everyone should read it!

Thanks for reading my review of ‘Drawing Dead’, it’s available now in e-book and paperback format, it can be purchased here! Have you read it already? What were your thoughts? Let me know! If you’d like to follow JJ DeCeglie, so you can keep up to date with any future books, you can follow him on Twitter @jjdeceglie